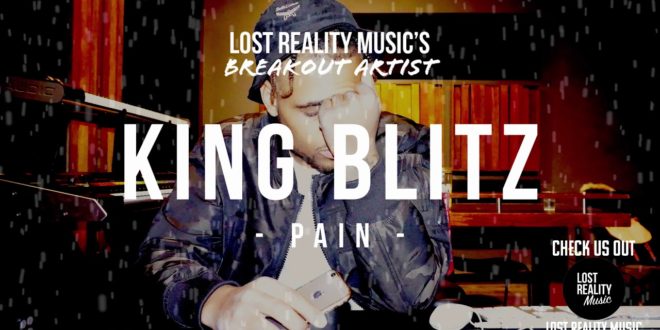 Hot off of the announcement of being named the winner of the $10,000 Lost Reality Music Contest, Atlanta’s King Blitz debuts the sentimental release “Pain”, produced by LRM founder, Jams Phillip. The highly polished single carries an explosively sung chorus while King speaks about searching for answers to life’s hardships. In a humble tone, Blitz rides the colorful instrumental for close to three minutes and wishes that listeners can find their own answers before time finally runs out. Allow King Blitz to provide you with undying hope thru his new single, featured below.

Working out of Detroit and Chicago, Lost Reality Music (LRM) is excited to announce Atlanta-based Producer and Artist King Blitz as the winner of its $10k contest. The artist management company seeks to help keep the arts alive. Founded by music aficionados, they understand that making music isn’t cheap. So their main goal is to help artists keep their dreams alive with cash prizes, equipment giveaways, crowdsource beats and so much more.LRM is putting its money where it’s mouth is by announcing King Blitz as the official winner of The $10,000 Lost Reality Music Contest.

The best ideas are often generated when adversity is faced. No one understands this better than LRM’s founder, James Philip, a deep lover of music. Having played with music as a hobby for most of his adult life, Philip, quickly turned his music hobby into a passion. A true audiophile, constantly surrounded by speakers and awesome headphones, Philip now getting his hands involved in the production of King Blitz’s new album.

King Blitz is a rapper, producer, and songwriter extraordinaire on the rise. Born in Gary, Indiana in 1991, Blitz began rapping at the age of 9. His mother is a singer, poet, & artist and his father is a guitarist, singer, producer, and writer. Outside of being musically influenced by his parents and siblings, he also gained inspiration from listening to international music mogul Michael Jackson. You can keep up with the latest news on King Blitz’s website and stream his music on Spotify.

Watch King Blitz’s interview on Youtube to learn more about his new album dropping January 24. You can listen to “Pain” by King Blitz on the Lost Reality Music channel that was just launched. Follow Lost Reality Music on Instagram and learn how you can win a chance to hang out with King Blitz in the studio as he records his next album all across the country.

President, E.I.C. & Content Manager for Get Your Buzz Up - Digital Media Specialist For Independent Artists
@blitzb_60505
Previous Katiah One dons all black everything for the Rotten Apple anthem, “Tail Spin” – @OKayNyC
Next On the enchanting “Beautiful”, RIIV croons our ears into an audio paradise