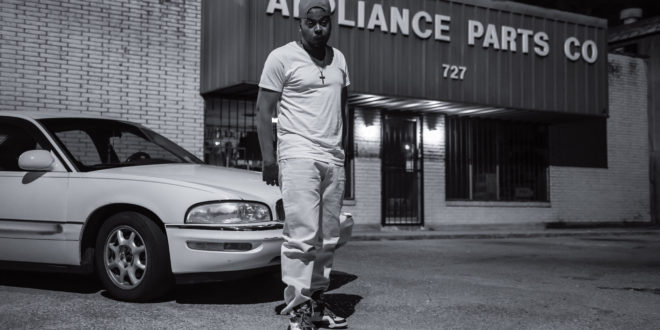 In the thriving land of newly found artists out of Jackson, Mississippi comes one of it’s lead off characters; Dolla Black. Not new to the music scene however, Black first got his tastes of music alongside his cousin La Roc back around 2010. Since that time, the Midwesterner has gone on to launch an impressive line of projects, started his own label called Black Dolla Entertainment and is currently campaigning one of his best songs to date, “Wait On It”. Join us as we speak to Dolla Black about his past, present and future in this edition of our BuzzN iNterview series.

GYBU: Pleasure to have you with us Dolla. As we stated in the intro, you first came into the music game with your cousin as the rap duo, Dem Boyz. What was it that you remember that brought the two of you together? What would you say was your guys’ best release as a group? Lastly, can we ever expect a Dem Boyz reunion song in the distant future?

Dolla Black: Us being family was what drew us to collaborating firstly. We were always around each other; weekends playing sports, spending the nights playing video games, just doing what young men do to keep out of trouble.  I was back and forth from Chicago with my father and I had a close friend and neighbor to my grandmother, D. Brooks. He was always musical as far as making beats, playing piano, drums, guitar or whatever. So through experimenting he started making beats and I was always the one learning things like Busta Rhymes’ lyrics and rapping. One day while at home I started writing, Roc started to as well and we just pursued it.

Our best release had to be #FlightCheck.  It was when we were starting to gel on a higher level and people around the city were starting to believe in what we were putting down. We got a collection of records, called up DJ T. Lewis to host it and the rest is history. If you’re able to find it online it still rides even though some of the representation is dated.  It was also the first project that was released under the Black Dolla Entertainment imprint and the first time that AVEVO got real material out, so that project held A LOT of weight momentum wise that turned over a lot of stones for us.

I definitely believe that you may hear some records that Roc jump back in the booth to have some tonal input on. Definitely not far-fetched at all!

Between that time and releasing your very first solo album, Dolla Black Entertainment was formed. That’s a big step from being in duo to running a company! What inspired you to want to fully pursue this avenue? For aspiring CEOs, what advice can you offer up in regards to setting things up correctly?

I think seeing that it was possible and knowing that no matter how much work you put in for someone else you can always be undervalued and underappreciated. That made me want to do what needed to be done so that other members of the entity and I could truly be appreciated and pushed to reach our full potential. Not to mention always looking up to people like Diddy, Ludacris, Master P and more to date Yo Gotti, Rick Ross, and Top over at T.D.E. I always wanted to have full control in a loosely controlled industry from the artist perspective.

The best advice I can give to aspiring businessmen of the industry is to hire an entertainment lawyer … it makes things so much easier!

Next up on the resume is “Let Me Work” where we witness the transformation of Dolla Black into the strong, bawse-minded artist we’ve become familiar with today. You had a big hit on your hands with “Ain’t Fuckin’ With Me”! With this being your official debut album, what obstacles did you face while crafting it? What were some of your inspirations when writing songs like that?

The biggest obstacle that I faced was people letting me work! (Laughs) Thus, the name of the project! It was a point where I had a lot of positive energy around me, people trying to drive me forward and wanting to see me do well. At the same time, it would become overbearing.  Sometimes it would be input offered when I didn’t want it and attempts at redirecting my focus when I knew the direction needed to do with things.  It helped me name that project properly.

Another obstacle that I faced was trying to finance the project coming from getting married AND having a baby, so you can imagine how difficult trying to deliver your first album perfectly can be with so many changes taking place. And the inspiration at that time was pure will and aggression. I was angry at the way that my previous situation was handled and dealing with the weights that come with progress so that was more than enough fuel to drive the start.

The Jackson Hip Hop Awards also thought the album was equally as great because you brought home a few awards that year! (Laughs) What was that whole experience like for you? It must’ve been a huge accomplishment to you, a well deserved one at that.

Ah man it was perfect because it showed me that even when you think you’re about to get your crowning moment, when all eyes are on you and you get placed in your proper light, nobody will be there to see it! (Laughs) That was a momentous moment not just for me but for the company.  We took home Cypher of the Year AND Label of the year along with the Album of the Year. Those meant the most to me … for the team! It was big! Very big! I still appreciate the Jackson Hip Hop Awards for honoring US in that light.

You’ve gone on to release other projects under your catalog such as the “BlackOut” EP, which was exclusively produced by AVEVO. When paired together, the two of you make some of the most impressive street music that has came out of Jackson. How did the two of you end up crossing paths with each other? How would you explain the chemistry between the two of you guys?

That guy is my brother from another mother.  We went to middle and high school together and all I had to do was put the software in his hands when we reconnected and he ain’t stopped running since! To even try to place a label on the chemistry is impossible. I just know that he understands the vision and vice versa. So, when we lock in and set our sights on the goal the only thing left to do is get it out. That’s what we do best.

Speaking of AVEVO, you two have a serious hit on deck in “Wait For It”. His bone chilling dark soundscapes fit your vocal tone perfectly. Camden Da Bastard did a great job matching the video to the single. How did this video come about and can we expect future Camden videos from you Dolla?

Camden and I have been LONG overdue for some work together by way of visual and audio. To be honest, I think he single handedly created one of my best visuals to date. I sent him the record long before it was ready, told him I needed him and he did the rest of the work. He surpassed even my expectations because creatively I didn’t see what it was that he delivered.

So, to answer your second question, HELL YEAH you can expect more collaborations with me and Cam! Don’t be surprised if you see him anchoring a majority if not all of my product from this point forward.

GYBU first caught heat of your music from 1st Day Fresh owner, Beamon. He sent us songs that would go on to become the #BlackFridays EP. On this effort, we get a more soulful, Hip Hop approach from you. It’s not too often that an artist can cross over from Rap and Hip Hop and be great at it. AVEVO takes a soulful trip down sample lane and you get deep with the lyricism. I personally enjoyed that EP alot. What exactly brought these project into existence and will there ever be a follow up series along these lines?

Super salute to that boy Beamon! That’s my dawg on more levels that one. Respect goes a long way. Black Friday’s was a nod to the campaign that kicked off Black Dolla Entertainment, where all artists that were with the company at the time dropped a new single. This time however it was all me, all Dolla Black. Not necessarily to put together a project but to release new music seeing as last year I only released one record, “All Day”.  There is a possibility of there being another Black Friday project but I can’t guarantee that … it depends on the growth of myself as an artist as well as awareness.

What’s next up for 2017 Dolla, inquiring minds want to know.

Well right now I’m in campaign mode for “Black Crown” that I just dropped with my rap partner Savvy under the group name, BlkCrwn. You can find that on all digital distributors and on BlkCrwn.BandCamp.com.

As far as Dolla is concerned, I’m working on tightening up an album to be released.  I haven’t had an album effort since 2014 so I think it’s time for me to provide something creatively fresh to satisfy the family that supports me and to gain the ear of some that may be unfamiliar. More visuals as well from Black Friday’s too! Gotta push that project further.

For interested parties looking into hearing more of your music and keeping updated on future news, where can we locate you online?

I made it easy for everyone! Go to www.DollaBlackBDE.com and sign up for the email list.  I always blast new content, upcoming releases, shows and music there first before putting it on social media.

Dolla, we want to congratulate you on your past successes and wish you nothing but the best of luck going forward. At this time, we’d like to turn the mic over to you and let you add a closing statement to the interview.

First of, and most importantly, I thank you all for taking the time out for me.  It’s appreciated more than you know. Follow me on Instagram and Facebook at @DollaBlackBDE and hit me on anything that you can reach me on and let me know you rocking with me! All love from the Third Coast!

Dolla Black will continue to push forward, work steadfast and smart and ultimately establish himself as one of Mississippi’s next-gen breakthrough artists. We here at GYBU would like to thank Dolla Black for checking in with us and giving everyone the chance to learn more about him and his music. Stay tuned to GYBU and DollaBlackBDE.com for future releases and such.

President, E.I.C. & Content Manager for Get Your Buzz Up - Digital Media Specialist For Independent Artists
@blitzb_60505
Previous (New Video) – @TambaHali91 “The One For Me”
Next (New Audio)-@JBdaPilot Ft BJ The Chicago Kid – These Days