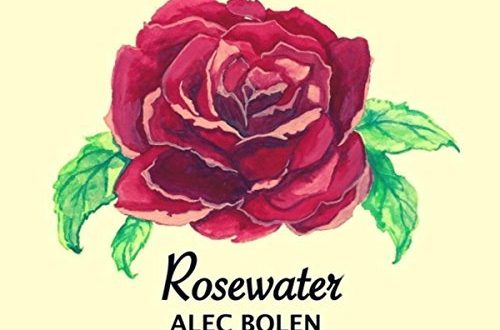 “Rosewater” is an EP from Oregon emcee Alec Bolen that centers around a young couple’s relationship journey, all smothered over extremely chilled Hip Hop production. Clocking in at seven tracks total, Bolen exercises potent wordplay that blends old school Hip Hop with modernized tones of today’s rap market. Although not his first project release, “Rosewater” marks his first major release outside of the Soundcloud world. Thus far, the EP has birthed one official video for the track, “Autumn to Winter”. We here at GYBU were moved by the content of the album so much that we felt the need to carry out a track by track review. Join us below as we offer our POV on Alec Bolen’s love fueled “Rosewater”.

Ninetynine – The intro sets the stage of this new found love story being told thru the EP as the pair share good times and car cruising trips. It’s also a great example of Bolen’s unorthodox song writing abilities. Rhodes, sampled female vocals and crispy drums make up the sound bed for “Rosewater” to begin sprouting. The song is made up of two chorus parts and one lengthy verse. The beat changes put listeners into a state of euphoria. The song closes out as the following song blends in.

Petals – Alec keeps the “Rosewater” theme strong by titling this one “Petals”. The happy times from “Ninetynine” cross over and finds the emcee growing closer to his love interest, both physically and emotionally. From speaking about the yearning to meet her whole family to not wanting to spend time separated from one another. The song sums up the beginning stages of love along with the feelings and thoughts that spark from that emotion. This track has no hook but continues in the path that the introduction song did as being derived of one verse. The somber piano notes that kick in around the 1:00 marker mimics in sound how the feeling of love builds up on you. The beat plays into silence for a small period of time and brings things to a close. Season – Up to this point, the production of the EP has been pretty chilled, with very little experimentation. That is until “Season” revs up. Listening, thoughts of Outkast, Kanye West and other avant garde acts come to mind. As with “Petals” the beat fully takes over for around a minute or so. Where the last song closed out with the beat, “Season” starts up with the instrumental build. When Alec does come in vocally, he slices thru the beat like a hot knife thru butter. He spits, “grab the hand of the devil, do a dance with the treble / put your face to the bass / it’s an antidepressant”. If the Oregon lyricist’s multi-syllable wordplay and fast delivery hasn’t caught your ear yet, it will on this cut. The instrument selections for this song can be described as intergalactic or in other words, out of this world. Her – This particular song has a double meaning. The content on “Her” begins with what sounds like him speaking about his girl but as the second part rides in, that thought quickly turns into “Her” being symbolic of music and his love for creative expression. The hook is soulful AF, featuring a singing female sample. Once again, Bolen doesn’t disappoint with his lyrical prowess, even when rapping about love. After listening, it seemingly appears that Alec is highly determined to achieve success with his music.

“So Mad” – It’s unclear if this song is a response from Alec’s love interest finding out that his first true love will always be music and that’s when her feelings start turning bitter. I got that hearing it. One thing is for sure, this is where the album begins to take a climatic turn. Arguments ensue and true colors are shown, as with what happens in every relationship. We’ve all been there, these feelings will either make or break a couple. Bolen serves up a personal POV of his experience in this song”.

Autumn To Winter – Out of all seven songs of “Rosewater”, this would be the single I’d lead off with. Doing so was a very wise decision on Alec’s part. It has everything needed to be a hit from the production to the content. The subtle introduction is blended with the sounds of pouring rain and spectacular piano chops that hit the heart full force. Bolen starts his flow off slow but kicks his delivery into third gear at the drop of a hat. The theme of the song how feelings can change as does with the seasons. This one has a video for it that made me enjoy the song that much more. As with “Petals”, the poet utilizes a single rose in some of the shots to keep the “Rosebud” theme strong. Simply put, I’d love to hear this get into radio rotation.

Light Travel – The last song on the EP is by far the most interesting, something I quite wasn’t expecting after hearing the rest of the album. Alec channels his inner R&B persona and runs his flow thru the buttery beat effortlessly. The slow yet soothing production finds the young talent experimenting with layering vocals which is pleasing to the ear. It was a clever way to bring the EP to a close. All in all, “Rosewater” gets 2 thumbs up from our way.

Stream the full “Rosewater” EP below via Spotify