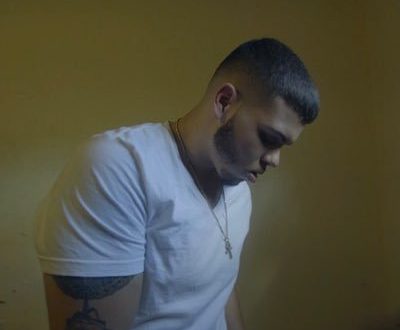 Newly emerging artist Ant Ohso Dank hails from the small town of Fitchburg, Massachusetts. Having endured a mass amount of turmoil and stress growing up, Ant made a covenant to himself to never end up boxed up again in those situations if he could prevent it. His first official video, “6 Days” revisits those days and his newly found route. Join us as we speak more to Dank about his upbringings, video and much more in this latest installment of our BuzzN iNterview series. Welcome Ant, thanks for joining us. To begin, let’s discuss Fitchburg and the home you grew up in. What was life like before Rap?

I grew up on 54 Clinton St.. The building I lived in was tore down like 2 years ago. Growing up, I was massively influenced by music. I had cousins who rapped, my mother and sister sung and I was raised in church. Growing up, music was everywhere around me.  It was never easy growing up but my parents never let me go without. We lived in a poor neighborhood, where the environment was get it how you can. There was alot of hustling going on and my momma did whatever she could to keep me away from it.

Before Rap it was just hustle, that’s it. Get it however I could by any means necessary. I speak about it alot in my music. I want people to feel like they’ve gotta get up and get it whenever they listen to my shit.

Your music influencer list includes greats such as Lil Wayne, 50 Cent and Meek Mill. How did each of these artists play a part in molding your music?

Growing up, Weezy was everywhere! Like this dude ran shit for years. Wayne’s flow and persona always attracted me to listen more. His metaphors were what I felt like really set him apart. I can really appreciate an artist who can make so many tracks and keep himself relevant. At the end of the day it’s more than just making one hit, it’s momentum.
50 was just mentality. The man’s mindset, how he views shit from a business point, is crazy! We can sit here and say his music spoke for itself but beyond the music, he’s smart. Have you ever seen that interview with him on the rooftop I believe ? Where he talks about the 48 laws of power ? Come on man, homie was way ahead of his time. He knew what it was to have ambition and actually get the fuck up every morning with a goal in mind.
Meek Mill is my biggest influence. He just gives you that pure uncut raw from the heart. His passion can be felt in every line . I’ve watched him from back in his Flamer days to Dreamchasers. He gives you pain and motivation. I’ve always been told I was like a motivational speaker In my hood . I get that hunger and swag from meek.

How would you describe your sound exactly?

Groovy. I’m giving you me. It’s lit and makes you wanna move but at the same time, I’m speaking life real shit. The fact that it makes you wanna party to it is an added bonus!

For your debut video, you teamed up with Harlem’s Benji Filmz. How did the two of you end up linking together?

I linked up with Benji thru my boy, Shugg. Shoutout to him, he’s another artist in my area doing his thing. Much love dat way! But yeah, I got the connect thru him. I hit Benji with a call and we linked. From there it was all love when he came down from New York. He’s all about his craft much respect to him.

Before getting into the details of “6 Days”, let’s speak about Zavian. He also features on the track. How would you explain your guy’s relationship? Should we be on the lookout for more music from you two or possibly an EP?

Zavian is another artist from my area who has a similar mindset to mine. I linked up with him through a home town friend we call Macho. He thought we’d be a good fit. Mad respect to Zav, he’s humble and into his craft.
Maybe in the future but as of right now I’m just focusing on my project I have coming.

“6 Days” brutally speaks about what lead up to your arrival. The video was even shot at the actual home you grew up in. Please share with our readers what inspired the lyrics and what you’d like viewers to take away from the video.

I was out on my own by the age of 17. 22 Pearl was where I actually moved to. That’s the crib you see in the video. I began hustling and going through a lot of shit. That’s where it all started at. Alot of squad close to home know we refer to that spot as the bando, that’s where the come up happened. I went plenty days with no food or electricity for a long time. I had the same clothes on for days at a time; roaches crawling everywhere, roof leaking, cold ass winters, etc. So cold in fact that I remember sleeping on my kitchen floor next to the oven to stay warm. My spot ended up getting robbed by people I thought were brothers. My ex-girlfriend was cheating and set up a plot with the dude. Then one of my day ones passed away.. I felt like my back was against the wall. I had no choice but to hustle harder and get out. These events are what lead up to the creation of the single. What’s next for you now Ant? Are you planning on releasing any new music this year?If so, can you leak any details pertaining to it?

I’m releasing a new single called “Adios” as well as a mixtape and the album I mentioned earlier.

Massachusetts has a long list of talented artists. Are they’re any local rappers you’d like to collaborate with by chance?

Like I said prior, I’m just focused on my own music and trying to be the best version of me I can be.

For those looking to stay in tuned with you going forward, where can we find you online?

Ant, it was a pleasure having you with us today. In closing, please feel free to let out some shoutouts and leave some last words for our readers.

No doubt, shout to everyone who’s supporting me in my city. This is just the beginning and I will notstop until we’re on top! Be on the lookout for more music coming soon… #OhSoDankNation

President, E.I.C. & Content Manager for Get Your Buzz Up - Digital Media Specialist For Independent Artists
@blitzb_60505
Previous Bryan Harper’s “Roses To Bare Your Soul” touches on life and America – @ tbe_bh
Next Qveen Herby blends edgy R&B melodies with a very pronounced flow on “Love Myself” – @qveenherby