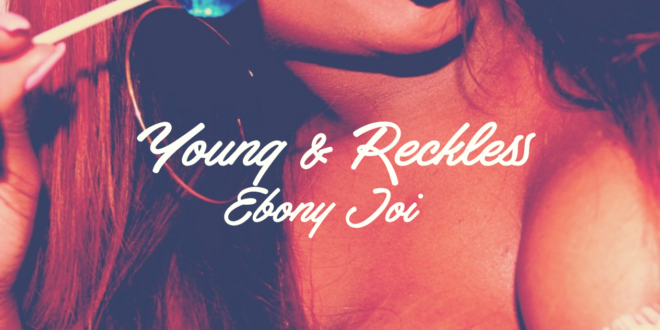 Building off of her freshman effort, which landed on the iTunes Top 100 R&B charts, Ebony Joi comes aggressive as ever. Her sultry voice and added ability to spit rhymes makes her a force to be reckoned with. Joi’s songs are full of confidence, bravado and a don’t give a f**k attitude which are traits that have lead up to her current day successes. Ahead of releasing “Young & Reckless”, Ebony presented fans with a visual prelude that offered an in depth look as her as an artist.

With that being said, GYBU took a moment to visit each track and offer up our thoughts on them. Join us below as we review “Young & Reckless” from Philly artist, Ebony Joi.

Young & Reckless – Ebony immediately begins the EP with the title track. From first listen, the beat reminded me of Ginuwine and Timbaland’s “Pony” single. In fact, it sounded like there was a Tim adlib incorporated in segments of the song. Right off the bat, Joi lives up to the EP’s title as she personifies the young and reckless state of mind. This song is sure to strike the hearts of the youth with it’s rebel-based mentality IDGAF attitude. Aside from that, it’s an awesome way to kick off a night of carefree partying with the crew.

Solo – I had a hard time getting past the first song. After a dozen or more plays, “Solo” finally began to play and I was instantly hooked. I’m a beat enthusiast and this one really intrigued me with the arrangement and sound selections. I got a Timbaland / Missy / Aaliyah vibe from this one. An ode to the single life and independence, Joi speaks about moving on from a relationship that caused more damage than good. With that realization, Ebony fully focuses her attention back on herself while eliminating the dead weight. “Solo” also marks the first track that channels the Philly songstress’ rhyming abilities which surpass many rappers of today.

One In A Million – Speaking of rappers, the next song up on the EP finds Ebony channeling her gangsta for the braggadocios, “One In A Million”.  I find it cliche that I previously mentioned “Solo” reminding me of Aaliyah and Joi drops the line, “one in a million like my name is Aaliyah, Helen Keller to the bullshit, I don’t really see it, no no”. The beat has a strong trap influence and cleverly used raspy adlibs. This comes to a climatic ending as we’re treated to a clip of Larry Graham’s “One In A Million You”. There’s even an official video available for this one.

Gone – This is the “get it in” single. So what better way to set the mood than with a syrupy sample chop from Drake’s standout verse off “I’m On One”? Indulge in your liquor of choice and be prepared to be seduced verbally. Ebony victoriously chants ‘we keep going and going and going” like the Energizer bunny when it comes to setting the party off properly. An array of vocal takes gives this number a trance inducing effect on the mind, especially while under the influence.

Bad Decisions – This song for some odd reason reminded me of Micheal Jackson’s “Dirty Diana”. With the “Young & Reckless” lifestyle comes “Bad Decisions” such as one night stands and stiff hangovers. Ebony keeps it all the way one hundred however in the chorus as she states, “you ain’t really living, unless you make some bad decisions / oh no, as long as I’m forgiven, I’ma make some bad decisions”. Her brutal honesty and strong female stance could very well draw comparisons to to artists like Rihanna, who’s she’s opened for prior. It’s not too often that a female could shatter the pretty girl persona and really bear her soul like this, awesome recording.

Rest In Peace featuring James Poyser, Kirk Douglas and Questlove – Having been blessed with opportunities to open up for huge acts such as Bruno Mars, Usher and The Roots, Joi has built strong relationships within the industry. This holds true for the last song from her EP, “Rest In Peace”. Unlike all of the previous recordings, this one has the potential of striking international accolades. Following a similar theme to “Solo”, Ebony gets a Gospel infused soundbed full of country guitars, church organs and lifelike drums. If you weren’t already sold on Ebony Joi by now, this single should have you hook, line and sinker.

We get a well proportioned serving of Ebony Joi with “Young & Reckless”. She proves yet again that she has everything it takes to be a musical powerhouse. She can sing, rap and write catchy, compelling tunes. What a way to follow up the accolades that “Ace Of Spades” garnered. Fans of Urban Pop and R&B will go crazy over this project. The same can be said from the young lady demographic who are sure to easily relate to Joi’s themes and topics. The album is currently available for purchasing via iTunes and can be streamed on Spotify.

To stay updated on all things Ebony Joi, make sure to visit www.ebonyjoi.com.