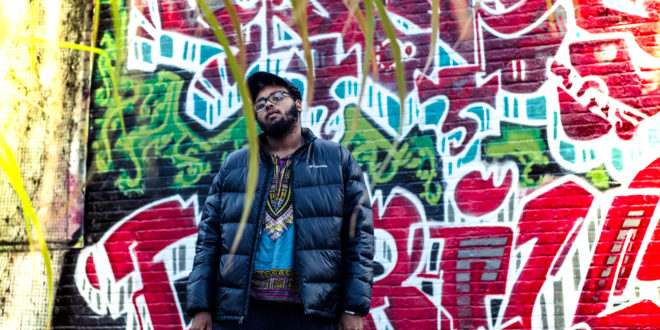 Newcomer AyooCheveyo hails from the windy city of Chicago but now resides in Madison. His latest effort, “Comeupits”, is the second drop of a four part series originally scripted as a play. In the series, “Comeupits” serves as the first installment, a prequel to “Someday”. The four releases of the project in order are “Comeupits”, “Someday”, “Thoughts From A Balcony” and “Peace Sign & A Vega”. A.C.’s style can be summed up as New Age Hip Hop. However, his focus is more Hip Hop than anything. The nineteen track album is now available exclusively at GYBU’s Audiomack page. Below, we visit “Comeupits” and share our thoughts on some of our favorite tracks.

The Block Forgot Him Longer – This is my favorite song from the album. I love the soul sample flips and lo-fi Boom Bap drumming. The pianos set the ideal tone for Ayoo to twist verbiage over. 00:39 finds the Wisconsin newcomer rapidly firing off rhymes in a cypher like fashion. The song speaks heavily about his hometown’s inner city streets and his experiences of trying to make it out. The chorus sums up Ayoo’s state of mind here, “the block forgot him, the block forgot us / now that we on man the block it want us / thinking back to the block but what the block give us?”. Loved the third verse as he goes into a story telling element that would make for a great video. If you do anything, make sure to check this one out.

Rock Ya’ Body – Of all the records, this one would be the one to fare best commercially. Cheveyo displays an old school rhyming formula here and delivers it in a raspy tone. The beat is riddled with maracas, Rhodes and congos but it’s the explosive horn arrangements that give this one so much flavor. When the “Rock Ya’ Body” sample kicks in, you won’t know if you should dance or sing along. A.C. blends a House-like hook into this which is where the radio friendliness arises from. I can’t quite but my finger on who he sounds like here but I hear elements of Rakim and Pacewon all throughout. Loved the Jazz infusion, it brings listeners back to the early nineties era of Hip Hop.

Sorry – A twisted relationship tale told over a surreal, atmospheric instrumental. This track will more than likely win the hearts of Lil Yachty fans; especially the ones who go crazy for his breakout hit, “1 Night”. That’s kind of the feeling I received when hearing it. Ayoo uses a multitude of tracks to transform his voice into a harmonizing tone as heard in the latter part of the song.

Search – Midwest meets the Orient on “Search”. Piggybacking off the tone of “Sorry”, this one is less Yachty and more Hip Hop. I thought of Karate Kid when the pan flute kicked in. This is another word bending presentation as the emcee spits, “that’s o.g., that bush / you gotta get up or you getting stumped / pushing for nothing or turning to something, they never seen diamonds be born from the dust”. These and other slick syllables spills in both English and Spanish make this one of the most lyrically challenging tracks from “Comeupits”. I initially skipped over this song but after burning myself out on the previously mentioned two songs, I found myself rewinding quite a few times to pick apart the words.

Woke Up – You can’t do anything but smile and clap along to this. The playful instrumental arrangement is bursting with all colors of the rainbow. “Woke Up” is the jam to throw on to get your morning (or night) started off properly. Cell phone off, no distractions with Netflix on. That, a bag of chips and a bong rip is how Ayoo’s ideal day kicks off. He leans towards harmonies more so than bars here. If you’re in need of a positivity boost, this one here is just for you.

I personally enjoyed the usage of movie segments to tell the album’s story. Movies referenced include “Shottas”, “Requiem Of A Dream” and “Pulp Fiction”. I also believe Cheveyo will continue to find his sound over the coming years and continue honing his song writing abilities. If he continues to construct songs like the ones we found pleasing, the young talent may very well come up with a winning hand. Check out AyooCheveyo’s “Comeupits” exclusively on GYBU.

President, E.I.C. & Content Manager for Get Your Buzz Up - Digital Media Specialist For Independent Artists
@blitzb_60505
Previous (New Audio)-@SammyAdams – Shining
Next (New Audio) – @Duece_DaGod is out to “Make Bread”