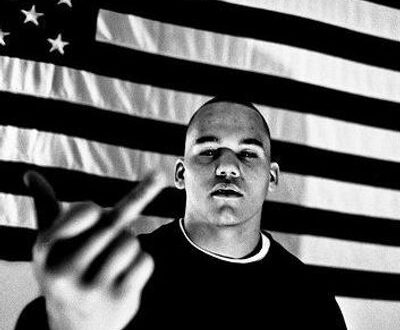 For this edition of our “BuzzN” iNterview series, we travel over to the city of Boston to speak with Peter James, a rising emcee with a very laid back delivery. Don’t let that fool you though, Peter has massive lyrical stamina and is able to present it in a fashion that will also easily catch the ladies attention. He dropped his latest project by the name of “The Cycle Tape” a few months ago and is also one half of the rhyme duo known as Lodus Dei. Join us as we speak with him about the album, his back story and much more in this exclusive interview.

Thanks for joining us Peter. We know you reside in Boston and was wondering how the current Beantown scene has influenced you musically. Also, how would you describe your sound to our readers for those just now learning about you?

Thanks for having me g. Yeah man, I grew up in JP but we moved around a lot as a kid. I spent a lot of time in Cambridge and the greater Boston as well. I would say the city is a huge influence. I grew up listening to a lot of Termanalogy and other Boston dudes. It’s sick to see Stizzy and Michael Christmas doing there thing for Boston right now.

My sound is different. I take risks. I sing and use live instruments in production. I’m not afraid to make very different sounding music. It’s soulful, rebellious and filled with emotion. Most of all, it’s original. I don’t try to sound like anyone besides me. I tell the truth.

Years ago at a New Hampshire YMCA, you came into contact with Nick Latanzi aka Nicholas Crow. The two of you would later go on to form the Hip Hop duo, Lodus Dei. Before we get into the music, could you explain what the name stands for and why you two decided to form a group?

Yeah, so we met at a YMCA summer camp in NH where a lot of city kids get bussed out to be in the woods, doing archery and things like that. I was actually younger and doing the camp thing, he was working as staff. We would just kick it and freestyle. When we started to see each other’s talent we figured it was time to start making music. Lodus Dei stands for Living Over Death Under Stress During Every Instant.

As a pair, you guys released four albums so far. The first two were before the actual group name came into effect. As Lodus Dei, you guys dropped “Wasted Talent” and “Rotations”. Your sound is embedded in classic Hip Hop roots. This is truly evident on songs like the string laced “Through & Through” and “Bohemian Sodomy, as found on “Wasted Talent”. Thinking back to 2012, what inspired you guys to create songs like these?

We were skeptical of everything including the government. Nick is really into sociology and anthropology, which helped us come up with a lot of themes that reflected our concerns about life at that time. In 2012, the world was supposed to end so nothing was off limits. We spoke about everything from aliens, the Illuminati, racial injustice, masculinity, black water mercenaries, etc.

“Rotations” was the last album you guys released. Again, you guys dropped some smooth ass records on that one. Now the question is will we be getting a fifth installment from you guys?

Tanzi and I are doing our own thing now, but he did feature on my last project and I hope to work with him on more music. Nick’s like the big homie so whenever he hits my line I’m down to make music.

So let’s switch the focus over to “The Cycle Tape”, you debut solo endeavor. Although this is a Peter James effort, you still stay grounded in true Hip Hop form as found in the Lodus Dei material. However, we get alot more personal on this one. What was it that inspired you to begin working on this album Peter?

I was in and out of a lot of relationships from around 20-22. It’s funny because when I came up with the idea, I was actually working at a school. I was in the break room with my co-workers talking about relationships and the idea came to me. Everyone deals with relationship issues, so I might as well put some songs together and make a little project to tell a story about what I was going through. Maybe I could reach out and make people feel less alone. Whether it be romantic, friendly or family relationships; we all got shit we gotta deal with.

Out of the six songs, “Crack Fien Dreamz” was the song that really caught my attention. Instead of me sharing the lyrics of the song, we’d like to give you the chance to explain the song to our readers. I personally would like to know how much of this song pertains to your own life.

The song is basically a conversation between a dealer and a fiend. The first verse is a from the view of a dealer that is explaining his own struggle with addiction and how he almost died from an overdose. The second verse is from the standpoint of the user. It’s more reflective, wishing he could go back to his life before trauma and addiction. He expresses his hopelessness in the most graphic and real way he can, trying to get someone’s attention before it’s too late and he’s gone.

Drugs have permeated every major part of my life. My father was an addict, most of my uncles were addicts, my closest cousins were addicts so I’ve seen a lot of it up close. When I wrote this song I was spending a lot of time with my cousin who was pimping hoes and smoking crack with them. I’d never been so close to the gutter and seeing my cousin like that put me in a dark place so I decided to write about it.

The album has been out for a few months now and every song has received thousands on plays a piece. With this being the start of a new year and the album still being fairly new, we were wondering if you planned on dropping any videos for the album? If so, could you share any details pertaining to that?

We got a couple really dope videos on the way. We got one for “Kicking the Blues” and one for “3 Piece” already in the works. I’ll have at least one of those videos done by June so make sure to stay tuned for that.

Speaking about 2017, what do you have planned for the remainder of the time? Should we be anticipating new music or live performances coming up?

I’m working on staging a mini tour out in Arizona right now, trying to hammer down the details and locations. New music is definitely on the way. I like to keep people on their toes so just expect the unexpected (laughs).

You’ve made a fan out of us here at GYBU Peter and am sure you will with others that read this interview. For anyone interested in hearing your past catalog or that want to stay up-to-date on things, we’re can we find you at online and social media?

Also check me out on Soundcloud, that’s where my music goes first before it’s downloadable. So if you wanna stay up to date, follow me on these three platforms.

We want to thank you for joining us to carry out this interview. With the type of music you’ve presented to us so far, you will have no problem making a name for yourself musically. Before we let you get back to things, is there anything else you’d like to add into the mix?

Before I go, I just wanna shoutout GYBU for having me. Everyone should expect fresh sounds and new styles. I don’t fall into a category I’m trying to make my own category so stay tuned…

Don’t always believe the hype and think that Hip Hop is doomed to die with the new generation of artists. As long as emcees like Peter James keeps on creating meaningful songs filled with emotions and lyrical content, the culture is in good hands for some time to come. Make sure to check out “The Cycle Tape” as well as the Lodus Dei albums and tune in to Peter on social media for new releases. This has been another installment of our “BuzzN” iNterview series, we will catch you next time.

Illinois native and Midwest resident, CityFME delivers his latest project, Divercity of the Mind. The …