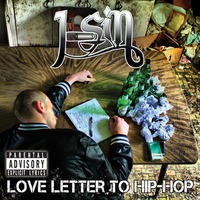 Slicka Fly Recordz signee J Sin’s newest album, “LOVE LETTER TO HIP HOP”, is nothing less than impressive. From the very first song, sharing the same name as the album title, J Sin comes off as a breath of fresh air for hip hop. With a beat that seems to have time traveled right from out of the late 90’s, he wastes no time name dropping the greatest of the greats throughout the 1st and 2nd verses, then spits about his ordeals in the game on the 3rd. J Sin runs thru the DJ PAIN 1 produced, “INSPIRATION” as he clearly states over the track how the haters inspire him.
“HUSTLERS MOTTO” is exactly that, block music. Don’t be shocked when you hear this one blaring outta trunks up and down the block. “BOTTLES UP”, “DANGER” AND “OUTTA CONTROL” are J’s club anthems. On “BOTTLES UP” J is assisted by the legendary Do or Die’s AK (He literally goes all out on his verse!). The album also features J spittin game to the females on “GIRLFRIEND” and “MAKE LOVE TO ME” where he details his bedroom techniques. “CLASSIC” and “LONELY ROAD” seem to lag a bit, but pick back up on the lead single titled, “GET AWAY”. On this song, J goes in depth over his personal tribulations. The end result is the need to get away. “TIRED OF BEING BROKE”, “CITY LIGHTS” and “ROCKILLY” are J-Sins offerings pertaining to his hometown of Rockford, IL. With “WHISPERS”, “FUCK IT ALL” and “NEVER GIVE UP” he dives deep into the mindset of the hustle’s mentality.
The album ends on a celebration inspired cut called “LETS MAKE A TOAST” where J-Sin runs thru his list of people worthy of poppin a bottle or two with. Overall, “LOVE LETTER TO HIP HOP” has slight flaws, but is a strong showing from the Madison Media Institute graduate. I personally wished he would have stuck with the formula of the first 4 songs, none the less; I give it a 6.5 outta 10. Go cop the album from off of iTunes now.
Written By Barry Quigley
@blitzb_60505

Get Away
11 Get Away feat. Guitarist Nick Sar