Romani recording artist PH4DE had dreams come true this summer when he found himself featured on a track with rap legend Lil’ Wayne, “No Mercy”. After gaining momentum, PH4DE then presented a new single titled “Interception” featuring Houston legend, Trae The Truth. The single was released to all music platforms on Friday, June 8th, and garnered major attention with the official premier being done by both the “Houston Chronicle” and DatPiff.com.

Since then, PH4DE has taken no breaks. Following a blazing fast trail of 12 singles in 12 weeks, he presents “Anæstesia”, the collection that will “breathe life into a faded world”. Anæstesia offers 15 songs, and boasts features from the likes of Lil’ Wayne, Trae Tha Truth, Emilio Rojas, Cryptic Wisdom, and others. Coming as no surprise, the entire project is produced by another Houston native: AIRON, who has produced every song ever dropped by PH4DE. The artwork features a collage of ‘real memorabilia’ that pays direct homage to PH4DE’s Romani roots, as well as the theme of the project. (he has mentioned that the flag on the cover is a scan of his actual flag, not a fake.) The project is released by “SP4CECITY”, a label founded by PH4DE as he continues his meteoric independent rise.

PH4DE is a Hip-Hop artist based in Houston. Born in Texas and raised by a single mother, his Romani heritage has inspired him to include themes of survival in the face of hardships, much like his Grandparents who fled persecution in Eastern Europe and survived by immigrating to the US. It was PH4DE’s Grandmother who bought him his first recording equipment and starting him on the path to creating music. As a Marine Corps Reservist, PH4DE received training that instilled in him an attitude of urgency, adaptation and triumph that he has taken with him into his music career to mold and adapt to the ever-changing music industry.

PH4DE counts artists like Royce Da 5’9, Chino XL, Eminem, Jay-Z and Drake among his influences. Whether spitting heavy bars, “phreestyling,” or featuring with some of the hottest artists in the game, PH4DE delivers. His unique writing style pairs lyrics with instrumentals, layering raw emotion with everchanging cadences and rhythms, which has garnered him much attention from his local music community. Also an entrepreneur, PH4DE launched his own brand, NTel Nutra, a sports nutrition product line that has been welcomed by the fitness community.

President, E.I.C. & Content Manager for Get Your Buzz Up - Digital Media Specialist For Independent Artists
@blitzb_60505
Previous TBtheRealist & We$ B invite listeners to pour up and indulge in life’s finer things at the “Beach House” –
Next MC Bravado ponders the thought of how much longer he’ll be spitting that “Same Old Song” most of us know – @MCBravado 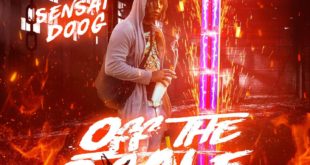