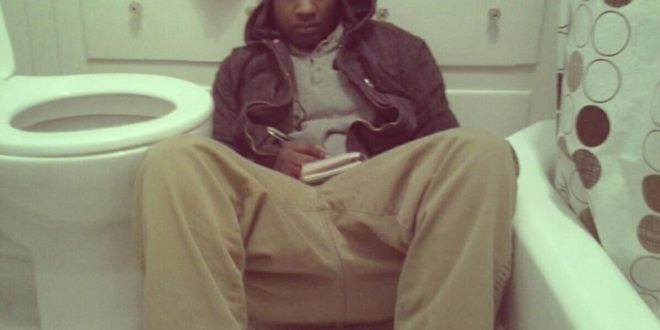 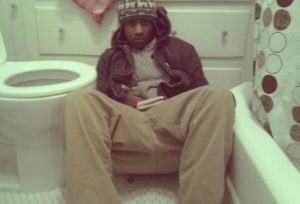 Portland rapper Sourmouth is not your typically emcee. His outlandish creativity would have some categorize him into a shock rapper category. However, Sourmouth grew up in an atypical situation. Adopted by a caring Caucasian couple, the PDX talent endured many hardships growing up both mentally and emotionally. Finding solace in music, the young fan of Hip Hop started to find he had a talent for creating his own tunes. With one official album under his belt and an underground mixtape, he’s just recently released his next project, “A Million Little Pieces”. Join us as we speak with David about life growing up, musical influences and his new album in this edition of our “Buzz’N” iNterview series.

It’s great to have you join us for this interview sir. To begin, could you explain a little about your name and your musical style?

I think the name kinda speaks for itself. I have a sour mouth. My producer and I were just talking about whether it’s even worth it to take the time to make edited versions of my songs due to the irrational amount of cussing in them. That’s just me partly due to my A.D.H.D. I usually don’t think before I make a decision, leading to impulsiveness. My mouth has no filter. I’ll blurt out whatever’s on my mind without much thought of the consequences. That’s kinda how my life has been. I had a great upbringing but always seemed to get myself in trouble. A sour life birthed Sourmouth.

Let’s travel a bit back in time to when you first released music. “Mr. Federal” was the name of your debut album and it featured fifteen tracks in total. Could you shed some light on the album and what the title represents?

The term “federal” is slang for being careless and blatantly illegal without remorse. Though I’ve calmed down as I’ve grown older, that term fit my personality to a T. It became a nick name people gave me. So that being my first CD, I wanted to cement it into listeners minds. “Mr. Federal” was less personal than my new album is. I was still experimenting with different styles but song’s like “My Dank” and “I Made It” featuring Mic Crenshaw gave my fans the first insight into my personal story. That’s the way i intended it to be. I didn’t want to speak about my whole story on one album. That mindset is what I believe will provide me with longevity in the game.

“Mr. Federal” was released back in 2015. It would be two years before we would receive another album from you. In between that time span, what were you doing as far as your music was concerned?

As far as music is concerned, I was mostly studying the business side of the game and saving my money for promotion. I barely had a budget at that time, one of the biggest things that was holding me back. Alhough I have alot more growing and learning to do lyrically, my lyrics were pretty polished and nice enough to hold its among many other local artists in Portland.

I was in the mindset that if you where dope, you didn’t need any promotion. Someone would eventually discover me. That thought process took along time to shake. I was stubborn thinking like that. As I started acquiring more knowledge, the promotion aspect was something that could no longer be ignored. I feel if you’re not spending at least forty percent of your time on promoting your brand then your dead in the water. I then began writing and recording “A Million Little Pieces” at that time. It took me around six months. The other portion of those years was outlining my marketing strategy for it.

You’re from Portland, Oregon. You even went as far as making a dedication song to it on the new album called “In The Rose City”. The PDX region has been booming over the past several years with what some are calling the next gen of artists. Besides yourself, what other emcees do you feel represent what Portland is all about? What is it about Portland that inspires you so much?

Portland is known for being weird, a well known and widely used slogan in the area. You can even see the famed mural in the background of the video. Though the climate and setting may be depressing to some, I find inspiration in it. Most of my lyrics and song content are full of anger, sadness and struggle. I can’t write when I’m happy. It’s when I’m at a low that I’ve written my best material.

As far as artists that inspire me, one of my favorites is Mike Bars. He’s different, just like Portland is. While some try to act gangster with it, he chose to stay in his own lane. Mike has creative punchlines, catchy hooks and a very versatile flow. Another artist is local legend Mic Crenshaw, who also appear’s on my new album. Notable mentions are my guys Dev Tha Baker and Karess, who has kind of a laid back gangster flow. He too also appears on “A Million Little Pieces”.

Before we get into talking about “A Million Little Pieces”, I’d like to shed light on a particular topic that the people ought to know about. As a child, you found yourself in an adoption situation. What makes your story that more interesting is that your foster parents happened to be an older white couple. They would soon end up loving you as if you were thier own. In your music, you speak about some of the situations you experienced growing up. Your lyrics speak about being called “Ashy David” in school and your parents not knowing to keep you stocked up with lotion. Growing up, what was your life like?

It was extremely confusing to me for awhile, especially in early adolescence. I remember having a line saying, “I didn’t even know i was black till the 5th or 6th grade”. Not in the literal sense, I knew my skin was black. Up until middle school though, I;d been mostly around white kids. I was exposed to alot more of the black kids and started to realize that there was a completely different culture tied into my roots.

That age in general was difficult. Identity searching, bullying, you name it. It still crosses my mind time to time. At first, I blamed my parents. I now know they tried but at the time, I vented out at them out of hurt. I was called Ashy David and other hurtful things. I’d fight alot, that’s one of the ways I coped. I idolized being “black” intensely. That mindset is what propelled me into the Mr. Federal character. That would ultimately land me into trouble with the law and a mindset I still struggle with some today.

“A Million Little Pieces” is the name of your new album. It’s also the name of the notorious James Frey book. Why did you decide to name this project after it? What are the comparisons between Frey’s story and yours?

I had randomly read the book before I even wrote the “Mr. Federal” LP. I already had the idea in my head for awhile. I connected with Fray in the sense that he had a great up-bringing, good parents, etc. With all of that, he was still screwed up and felt the need to self medicate with drug addiction. It wasn’t until late high school that i developed my first very serious addiction to Ecstasy. That lead to Adderall and marijuana. From two stay’s in rehab, 2 overdoses, a near death experience and a felony arrest, my addiction could no longer be ignored. Fray spoke alot about his aggression and his violent tendencies as well, something I also related to. Once I got better and grew more comfortable speaking about it is when I began penning “A Million Little Pieces”.

There’s alot of good songs on the album but my personal favorite is “I Hate It”. There’s an interlude beforehand that you share details concerning your family, mainly your dad. It really hit my heart man. Though you’re mostly known for being humorous and shocking in your music, this song is far from that. If I was asked to explain it, I’d say it was a cross between Eminem and Blink 182. From the beat to the lyrics, “I Hate It” is brutally honest and many of us can relate to it in some sort of way. Can you explain what was going thru your head when writing this song?

Man, it’s really a trip cause I can’t even listen to it without tearing up. Same goes for when I was writing it. Deep down inside I always felt like I let my parents down, my dad especially. I was his only son. When they got together, she was too old to conceive, so they adopted me. They did everything they could to raise me right and they did. All the things I got into was my own doing. I’m not a product of my environment, I’m a product of myself. There are no excuses. My whole family are high member’s of society. I always wanted to tell them that I was sorry. It wasn’t their fault. The Krauss’ were the best family i could’ve been placed with. So I ended up making an apology type song for the album. I did exactly that on “I Hate It”, which I am in the midst of shooting a video for currently.

Aside from the three singles you’ve dropped and “I Hate It”, my other favorite song is “Chief Like Keef”. Over a gladiator type beat from Millionaire Music that would make Russell Crowe cower, we find you in prime form spitting outlandish metaphors. Of all the songs, this one in particular finds you in perfect cadence. What was it about this beat that got you so focused on creating it?

Thanks, it’s one of my personal fav’s as well! I’m going to let you in on a little secret. I sometimes tend to make songs in the key of artists I look up to. Say what you want but i think all artists in general do this from time to time. With that being said, when I heard this beat I immediately thought of Eminem’s “Till I Collapse”. If you listen closely, you may notice the similarities in my cadence and approach. Another artist I look up to is Lil Wayne. That’s where I get my clever metaphor and punchline style from. I went in with those artists on the mind and the obvious, Chief Keef.

For anyone looking for guest features, how can they go about contacting you? Also, where can we find you on social media?

For guest features and collabs you can either email me at mrfedro@Sourmouth.com or messege me on my Sourmouth fb fan page as listed below.

Sourmouth, we’d like to thank you for sharing your story and hope you’ll revisit us when the next album drops. Although we spoke about a number of things, is there anything else you’d like to share with our readers out there before we bring things to a close?

Whether he’s crafting psycho raps or penning heartfelt tales, Sourmouth will only continue getting better in the times to come. The growth alone from “Mr. Federal” to now is ten fold, so just imagine what the next album will sound like. Again, GYBU would like to thank Sourmouth for taking the time out of his schedule to conduct this interview between one another. Make sure to grab a copy of “A Million Little Pieces’ via Bandcamp and stayed tuned for more singles and videos to release this year.