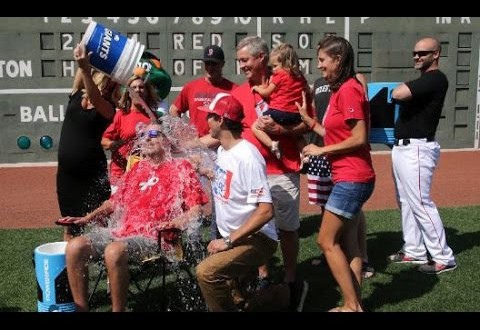 The origins behind the sweeping online phenomenon, Ice Bucket Challenge, can be traced back to golfer Chris Kennedy, Kennedy’s trainer, James Whatmore and Jon Bullas, Kennedy’s swing coach. It was Kennedy’s online video that seemed to light the wick to what has became an overnight sensation. However, it seems that the focal point has shifted over to Amyotrophic Lateral Sclerosis (ALS), also known as Lou Gehrig’s disease. ALS is a progressive neurodegenerative disease that affects nerve cells in the brain and the spinal cord. Motor neurons reach from the brain to the spinal cord and from the spinal cord to the muscles throughout the body. The progressive degeneration of the motor neurons in ALS eventually leads to their death. As of now, there is no known cure for the disease. This brings us to today’s featured video. It’s the story of Pete Frates, a former Division 1 college athlete and former captain of Boston College Baseball. Pete was diagnosed with ALS in March of 2012. Knowing that he was about to face the biggest fight of his life, Pete decided to come out swinging instead of giving up hope and letting ALS beat him. Thru a friend, Pete was introduced to the ALS Ice Bucket Challenge and with the help of his support system, blew the challenge up to biblical proportions and tens of millions of dollars for ALS research. Follow Pete, his wife, mother, friends and supporters through this truly moving story of faith, hope and strong will. It may bring a few tears to your eyes but the most important moral of this video/ story is to never give up and to continue fighting. I hope you are as moved by the story as I was. Written by: @blitzb_60505 http://youtu.be/yCoKB_tU9ng For more information about Pete & ALS visit http://petefrates.com/