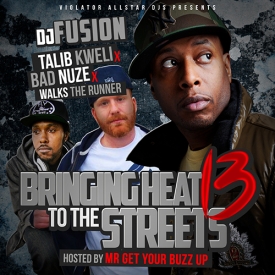 Violator Allstar DJs present DJ Fusion’s latest mixtape in his “Bringing Heat To The Streets” series, hosted by Mr. Get Your Buzz Up. First off on volume 13, we find political spitta Talib Kweli and some of his newest music such as his collab alongside The Roots frontman Black Thought & Rah Digga on “Art Imitates Life”. Next up, we have Wisconsin’s fast spreading emcee Walks The Runner. We find a small portion of his latest project, “Loquacious Linguist” on “BHTTS Vol. 13”. Last but not least, West Coast representative Bad Nuze features some of his tracks from his latest mixtape “Front Page Nuze” on “BHTTS Vol. 13”. Other artists are featured on the mixtape as well and are equally as dope. Even though the number 13 is known for being associated with bad luck and superstitions, this isn’t the case with Fusions’s latest serving. In fact, this is the best release in the series to date. Make sure to head over to http://fusionmixtapes.com/ and download all the “Bringing Heat To The Street” mixtapes and find all future releases there as well.