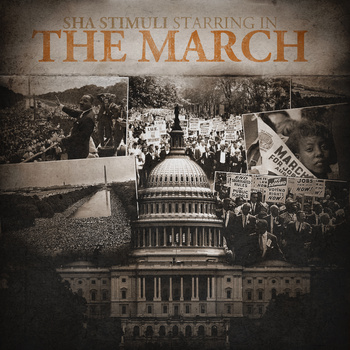 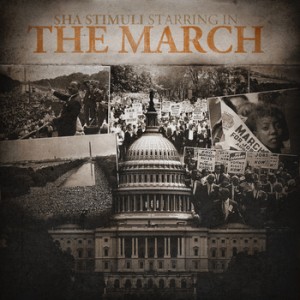 Being the younger brother of Lord Digga, one of hip hop’s notable producers, Brooklyn bred emcee Sha Stimuli’s spent most of his youth in the mix amongst hip hop legends like Master Ace, members of the Juice Crew, and Big Daddy Kane. Barely a teen, Stimuli found himself engulfed in an era that exemplified the essence of real New York hip-hop.

Stimuli officially stepped on the hip-hop scene at 14, appearing on Master Ace’s Slaughter House LP. When Lord Digga began producing tracks for the Notorious BIG, Stimuli had the privilege of being in the studio while Biggie recorded Ready to Die. Stimuli knew it was time to grab the torch, and go full throttle with his gift of lyricism when the world was rocked with the tragic and untimely death of Biggie.

Stimuli emerged on to the mix tape circuit, leaving a blazing trail of tracks on some of the hottest mix tapes in rotation. In 2003, Stimuli attacked the music scene with the release of his first mix-tape “Let Me Show You the Way”, where his smooth, conversation like flow, captivated hip-hop lovers. In October, Stimuli was featured in The Source Magazine as their “Unsigned Hype”.

In 2004, proclaimed to be the “next best thing “to come out of Brooklyn since Biggie and Jay-Z, Stimuli released his second mix-tape, “Follow My Lead”. The following year staying loyal to his fans Stimuli dropped “Switch Sides”, a CD/DVD combination where he masters the art of storytelling. Stimuli caught the eye of Lenny S, then A & R of Virgin Records, and soon secured a major record deal.

In 2005, Stimuli displayed his musical talent on a worldwide scale, performing in the first “I Love Hip Hop Tour” in Morocco. After being featured in a barrage of publications, performing at various venues, and making radio station appearances, Stimuli released “New York State Of Mine “in late 2006. The mix tape features Joel Ortiz, Memphis Bleek, Peedi Peedi, and Maino. In August 2007, Stimuli won Best Lyricist for Urban Threshold’s 5th Annual Underground Music Awards.

In January 2008, Stimuli and DJ Victorious launched a campaign to release a CD each month. For all of his diligent and creative work, Stimuli took home another award, winning Best Male Rapper of The Year in August 2008 for the 6th Annual Underground Music Awards.

Stimuli continues to be featured in publications from Essence Magazine to the Vibe. He is featured on the new Grand Theft Auto video game and his appearances on BET’s Rap City “Spit Ya Game”, and both of his MTV2 Freestyles are hailed as having the highest rotation numbers to date. Stimuli also made appearances in the featured film “Fighting” starring Terrence Howard and played the lead role in the independent film “Gotta Get Mine” all while working diligently in the studio on his debut album.

Stimuli will be releasing the mixtape, “The Break-Up Part 2: The Proposal,” Summer of 2011.