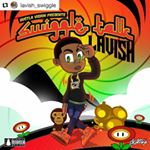 Although only officially adopting the title of rap artist a mere year ago, Houston’s Lavish (CEO of Hustla Vision Ent.) has made a sizable impact to date. On “Dumb Walk”, the first official single from his debut solo EP, “Swiggle Talk”.

Lavish chronicles his day to day extravagant regiment over a made-for-the-club beat courtesy of Iceman Chamberlain (TSF). Lavish’s growing fan base can also hear him on Yung Al’s single, “Waist Deep,” alongside Deemoe Trill, and Slim Thug. Although “Swiggle Talk” isn’t feature heavy, Lavish has definitely set out to leave a lasting impression on the music) game. Check out the EP below.

President, E.I.C. & Content Manager for Get Your Buzz Up - Digital Media Specialist For Independent Artists
@blitzb_60505
Previous DC native Keim drops an audio memoire of sorts with the 17 track album, “By An Artist Called KEIM” – @LadiesLuvKEIM
Next Drumma SC smashes the pedal to the floor board in the high octane video, “Overdrive” – @DrummaSC