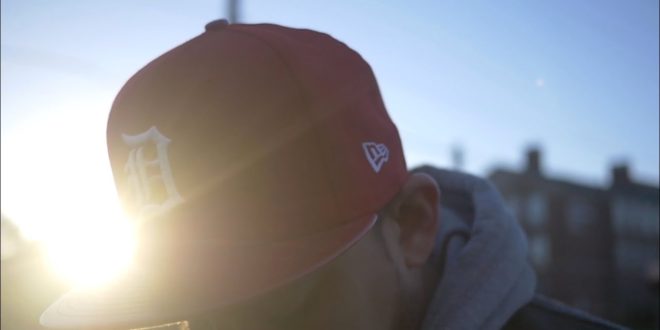 Info56 debuts a set of visuals for the title track behind his producer album, “Southwest” – @deathstar

Producer and MC Info56 leads viewers on a dawn-till-dusk tour of “Southwest” on the debut video from his instrumental album by the same name. Images of the iconic and abandoned Michigan Central Train Station at sunrise begin the video as Info walks past it along Vernor Highway – turning his back on this clichéd version of Detroit – to enter the vibrant Chicano neighborhood known as Southwest. Ascending into the morning, the sun shines on the everyday people fighting off the next wave of gentrification: youth smiling while throwing up skyhooks on an outdoor court; car culture enthusiasts posting up with hoodies up alongside understated black SS Impalas; cooks cracking eggs onto a sizzling grill before the breakfast rush; and street entrepreneurs selling frutas y elotes.

Director and Southwest native Arturo Riveras makes sure that place matters across these moving images, particularly with shots of Clark Park and the crimson and canary mosaic backdrop of its small pavilion. Flashes of B-Girl Snapshot’s floorwork echo the cypher rituals that crews like Motor City Rockerz have preserved on that same concrete. Deeper, these movements gesture toward the indigenous talking circles and education justice activism soaked into this soil. And not too long ago, you could find Info and Raiz Up collaborators on this humble stage, plugged into a generator, pushing kicks and snares out into the air to sustain the sacred practice of doing it in the park.

Info’s work with horn samples, light synth bass, and snare slaps make up the keynote of this soundscape. His work triggering brass on pads stands out as chops slowly pass energy between them like tight spliff handoffs among friends. These exchanges match the paced camerawork across the terrain, like slow rolling down Clark Avenue on Sunday afternoon. Listeners get a glimpse of Info’s work on keys during a short breakdown midway through the track. Cuts from Detroit statesman DJ Dez narrate this journey across lands.

President, E.I.C. & Content Manager for Get Your Buzz Up - Digital Media Specialist For Independent Artists
@blitzb_60505
Previous Nicki Minaj trashes her copycat doppelgangers in the official video for “Barbie Tingz” – @nickiminaj
Next TMG serves up a video for the booty shaking anthem, “Throw A Stack”