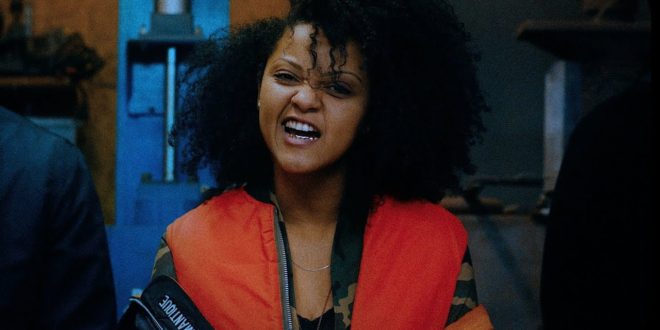 Naya Ali – Out The Dirt

Naya Ali is back in full force, and picking up right where she left off, with her exciting brand new single titled, “Out The Dirt”, that was premiered by COMPLEX. Co-produced by Kevin Dave and burgeoning Canadian musician Nomis, who is currently working with 300 Entertainment, Interscope and Sony Music signed artists, “Out The Dirt” is a gritty pure rap track, which sees Naya Ali in flying form, as she raps about not only trusting the process, but falling in love with it and fully committing herself to Hip Hop music.

Ethiopian born Montreal Hip Hop artist Naya Ali is one to keep an eye on this year. She burst onto the scene last year, with her debut single “Ra Ra”, which was championed by VICE, Spotify, where she was featured on ‘New Music Friday’ and broke into their Canadian Viral Chart and Apple Music, who highlighted Naya on their “Hip-Hop Quebec” playlist, as well as garnering support from the likes of Kingsize Magazine, IX Daily, and Ride The Tempo, among others.

For the visuals for “Out The Dirt”, Naya Ali has collaborated with Juno Award-nominated video directors Fatty Soprano and Shutter, to deliver a creative and imaginative 90’s cinema inspired visual chef-d’oeuvre, held together by clever POV shots and an unexpected story arch. The visuals tell their own story of the lengths Naya will go, and the sacrifices she will make for her music, but also tie in seamlessly, with the record’s gritty and masterful artistry.

Speaking about the inspiration behind “Out The Dirt”, Naya Ali explains that, “Water can cut through rock if persistent. You ain’t got no choice but to be persistent, there is no magic formula, there isn’t one single path, and definitely no one is going to come and save you. You have to believe in your God given gifts and make the choice to invest in them every day until potential becomes excellence.”

The Montreal native goes on to say, “the body of work I produce rely heavily on lyrical dexterity and depth. But at the same time, it stays light and easy to take in, so you have the chance to let it seep slowly into your mind. I’m not here to compete with anybody but myself, but I am confident my art will move the culture and reach the upper echelon of Hip Hop in due time. I do it for myself and for the culture.”

Highly recommended if you like Kendrick Lamar, 6LACK and artists that push boundaries, Naya Ali comes with an exciting flow, depth and delivery, which promises to bring the much needed versatility that is needed in Hip Hop music this year, with her unique, hard hitting and captivating style. The Canadian Ethiopian future rap star is hard at work on her forthcoming debut EP, “Higher Self”, which will feature both “Ra Ra” and “Out The Dirt”, is due to be released this summer.

President, E.I.C. & Content Manager for Get Your Buzz Up - Digital Media Specialist For Independent Artists
@blitzb_60505
Previous HXTXG heads out into the desert to pour his emotions out in “Greener Days”
Next OG Cuicide turns “Tragedy” to triumph with the assistance from vocalist, Apryl Paige – @ogcuicide