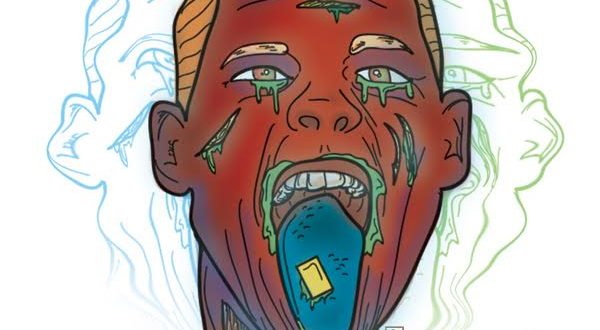 Open wide and dose a hit of Peter James‘s first ever solo release entitled “The Cycle Tape”. Though the Boston emcee is only in his twenties, his music has a very strong nineties influence to it. This will be pleasing to older Hip Hop fans who tend to stray away from more modernized styles. Much of the album is produced by Butter with the exception of “3 Piece” and “Kicking The Blues” and carries two features from Au and fellow Lodus Dei member, Nicholas Crow. Clocking in at six tracks, the album offers a little something for everyone. GYBU was moved by the album and now presents our track by track review below.

“Honey” – James decides to start things off with this relationship-based song that features the first of two guest features with Au. From the first listen, I’d compare Peter along the lines of G Eazy and Logic. He has a well defined delivery and can also switch up and add harmony parts to his performances as heard in the chorus. Butter puts together a classy instrumental for this one with the help of strings and stuttered, subtle drum programming. We find the Beantown rhymer in deep thought about a certain honeydip he became fond with but after some time and getting to know each, the fire has began diminishing. This is the start of James showing what he has when it comes to writing story-based songs.

“3 Piece” – This song shares similarities with “Honey” such as love and relationships. However, we get a more emotional Peter on this selection. What starts off as something soulful soon turns aggressive as the lyrics and beat begin to switch up, bringing about the feeling of a psychedelically-fueled audio session. The song is cleverly named “3 Piece” because it’s like three songs in one. Ghost McGrady feeds the track shrooms and not once does James loose his pace. In fact, he shines over the production and with the slick vocal edits at the tail end, this becomes a great example of how gifted the Boston artist is when it comes to Hip Hop.

“Manhood” – Butters re-enters the album for song three. If you haven’t caught on by none, “The Cycle Tape” speaks alot about drug use, women and decision making. For this particular track, it’s as though Peter has a revelation of sorts. He begins to really open up about true life scenarios. We witness James becoming a man thru the music. Check the chorus as he speaks “All I Ever wanted as a kid was a bad bitch / Only way I Thought I could do that was with alot of chips / Only way I knew how to stack was alot of flips / Hand to hands, duffel bags full of work, lotta scripts”. This hook also shows the mindset Peter utilize thru the course of the EP. The fast paced drums and choirs seal the deal and gives “Manhood” the final touches needed to make this a repeat song.

“Crack Fien Dreamz” – Pure Boom Bap with this selection. It’s also the peak of Peter’s honesty thru pen approach and my favorite song of the entire album. I hear elements from a wide assortment of emcees on this such as Nas, Biggie and Eminem. Talk about being poetical, if you do anything, please make sure to really listen to this song. With the sing-songy sound of the hook, I get blasted back to the good old days of Hip Hop when lyrics held substance and were full of complex syllables. The beat stays rooted in the classic East Coast Hip Hop sound that helped catapult the artform into the limelight. Instead of giving explicit details on the lyrics, you’ve just got to hit play and soak it in a few times.

“Trigger Warning” – This is the last time we will be hearing from Butter as he bids us farewell and leaves us with a dark soundbed on “Trigger Warning”. Full of hypnotizing keys and some chilling lines from James that speak about his feelings on God, dealing with his father’s attempted suicide and much more, this particular cut reminds me of Biggie’s “Suicidal Thoughts” but with a Canibus flow. Though there’s not a complex plot twist like with Big’s song, Peter provides a tale all his own and keeps on point with the overall concept of the album. Once again, he slips in a melodic hook showing his musical versatility.

“Kicking The Blues” – Just like how “The Cycle Tape” started, producer Felly provides us with a heartfelt soundscape. We find Peter alongside Nicholas Crow as they converse about getting away from the madness and starting over again. To say it simply, go back home. The super soulful sound is a perfect example of the type of music the duo makes as Lodus Dei. To top things off, Peter closes things out diligently and on a somber note.

I was beyond impressed with “The Cycle Tape”. I cannot believe I never heard of Peter James until this EP crossed my path. There’s not one iffy song on this project whatsoever. In fact, I wish there were a few more included to be honest. This is a great example of how an indie artist should construct a project with all original beats, no filler material and utilizing self-expression. After listening to for awhile, I feel as though I know Peter personally. That’s an experience I seldom experience these days. That and the fact that it sounds like he studied the greats and took pieces from them. I’d highly suggest this album to everyone and with only six tracks, it doesnt take over an hour to absorb. Keep a wide eye on this Boston rising star and listen to the full EP effort below.