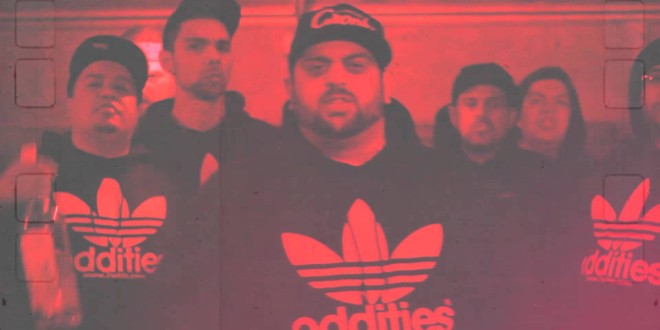 Get familiar with Seven Oddities Records, an insanely talented underground Hip Hop collective that’s been doing it since 2000. 7oddz strives on creating all releases in house and are continuously performing in Chicago and surrounding areas. Well, the fellas just recently announced a brand new installment in their “Out For Blood” releases. This will be the third release of the collection and the first of four chapters. Yes, the posse is dropping four installments for “Out For Blood Vol. 3”.

To get things started, the Chicago rhyme spitters deliver the first single from said project in the form of a video titled “Last Dayz”. Don’t expect some trendy styled visual here, we are talking about Chicago and underground Hip Hop here. With AWalkInDaPark Productions manning the lens, we are treated to a gritty, red hazed colored clip with the entire crew on set. Upon viewing, you’ll have flashbacks to when the Wu-Tang dropped the “Protect Ya Neck” video.

For “Last Dayz”, we get serviced bars from crew members Clever One, DreamTek and Hobes with Tek providing a post apocalyptic vibe that fits the emcees precisely. The chorus features all three artists doing a back and forth delivery. Check out “Last Dayz” below and catch 7oddz performing songs from the album January 23rd in Chicago at The Windy City Independent Art Summit.

Head over to Bandcamp and preorder a special edition hard copy of “Out For Blood Vol. 3 (Chapter 1)” that features eleven tracks and autographs from the entire crew, limited to 100 copies.

Also head over to www.7oddz.com to purchase merch and previous releases such as “Out For Blood” 1 & 2.