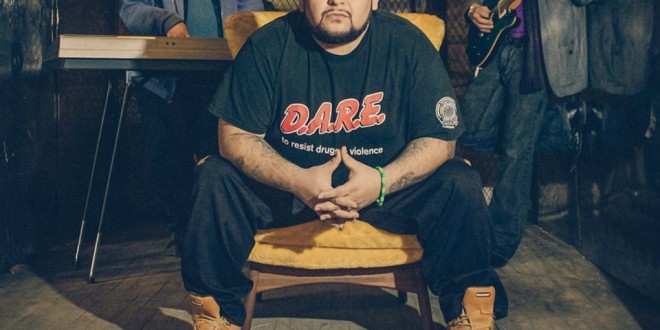 Big X isn’t your average emcee. After growing uninspired with hip hop and always dreaming of forming his own band, X did just that and formed the group BIg X and the Caucasians. GYBU had the opportunity to catch up with the fellas for another installment of our “Buzz’N” iNterview series.

So to start things off, why don’t you guys give your names and positions within the band.

I’m Roy, and I’m our voice of reason – I listen to the guys argue and then tell them what they agree on. I keep this place classy, adding touches of classical and jazz to our sound with the keyboards.

My name is Alex “Phal” Emetti and I am the lead rhythm guitarist and singer in the band. I also played bass on all of the recordings for the album. I contribute to the musical arrangement ideas and make sure everything fits together.

Other than always wanting to have a band X, why did you guys decide to get together for in the first place and take a swing and creating some quality music?

Roy: From the beginning, it was clear that we had a musical connection. I remember when I came in for my first jam session and we just started making music together. This project helps to broaden me as a musician, and I love seeing how our different personalities intertwine in our music.’

Phal: I’ve always loved to play hip hop because it’s a style of music that encompasses many other genres of music. When we got together, our unique styles complimented each other so much that it seemed that it was definitely something to make a go of.

X: The creation of the band was slow and grueling but when it all finally came together it was like it was meant to be. After several auditions and replacing members I think it just finally clicked that we are very talented as a unit, that we had something worthy of complete audience attention.

At GYBU, we usually are interviewing artists and producers. We like to ask what inspires them or what their creative process consists of. What is it like creating songs as a band though, where you’re not only writing lyrics but constructing the instrumentation together as a whole? Is there a benefit to being a band rather than being a solo artist?

Roy: When we create, one of us will lay down an idea and the others listen. We feel the music and start a conversation with one another that grows into something with its own life. This collaborative process allows us to create ideas that are bigger and more universal than any one of our stories and I think that helps us share our music with a greater audience.

Phal: There is definitely a benefit to working with a band as opposed to working as a solo artist. Where on person might think they have something perfect, someone else might hear something different and have a better way to do it. It’s beautiful when we come up with the simplest groove and build upon it to the point of becoming a full song.

X: For me personally it is making me become a better song writer. When I was doing the solo emcee thing, I had put the pen down and I was creating everything in my head. Plus, it’s different receiving a beat in the email with no back story to go off of, just cold loops and drums. When we write new music it’s actual hard work, no one has the freedom to hit repeat or rewind. They physically play for me as I write lyrics and to be honest now that I have this I don’t think I can EVER go back. People have sat in on sessions in our studio and leave telling stories of being surrounded by beauty they have never felt. I hope that soon the whole world will feel what those people did…

So for those of our readers out there that aren’t yet familiar with the movement, you guys have a dope project out titled “Priceless”. Eight tracks with songs such as “Shotty Smokin'”, “Smilin” & “The Answer”. Why did you guys decide to name the project “Priceless” and pick what was picked for the song selections?

Roy: It just made sense for our first album – I mean, we actually did it – and nothing is more valuable than being allowed to share our music with our fans.

Phal: I think that although “Priceless” wasn’t our first single, it’s one of our strongest songs. It really explains the feeling we have playing together.

X: The title was inspired by the final song on the album “Priceless”. In the chorus I say “I remember when it wasn’t like this, wasn’t priceless, can’t believe this is what life is”. Those words were spoke from a very personal place. I vividly remember being a nobody in the hip hop scene and then outta nowhere I’m kicking it with Domingo and Ras Kass and doing shows with The Beatnuts and JuJu is showing up to party with the band at our spot. People are singing my lyrics back to me. There is no other way to describe it other than “Priceless”.

Speaking of “The Answer”, the video the band dropped for it was nothing less than genius. The video was shot in one continuous shot, correct? Also, what is the meaning behind “The Answer”?

Roy: That’s what makes art so great – you get to decide what “The Answer” is to you.

Phal: For me, it means that you can look around everywhere but “The Answer” lies within yourself.

X: The meaning behind “The Answer” is that you are the answer to all your problems.

Name some of the band’s musical influences. What do you fellas put on while contemplating song ideas?

Roy: My background is classical and jazz – Herbie Hancock is one of my favorites. When we’re creating, I like silence so I can focus on what I’m hearing in my own head.

Phal: I started out as a metal guitarist, but very quickly started adapting to other styles: blues, jazz, funk, grunge, reggae and classical. All of this was molded into my hip hop style. Hendricks and Santana are two of my favorite guitarist. For me, silence is the best to create with.

X: We really don’t listen to much music when we are together, to my recollection, other than live performers we go to network with. When we are creating, it’s just alot of jamming and different sounds coming from the keys and guitar. As far as my personal musical influences… that could fill a book.

Being from Chicago, what are your views on the current state of violence plaguing the community there & do you guys feel music plays a part in it?

Roy: Music has such a profound potential to effect change and I’m proud that our music avoids fueling the hate and violence that is becoming epidemic.

Phal: Music can help soothe the violence and some can fuel it. In my opinion, it plays an enormously smaller role than the closing of schools and the unemployment problem.

X: The violence plaguing Chicago is tragic and ridiculous. I don’t condone it nor will I prolong it. I speak out upon the issue often on social media due to the fact of the constant glorification by other Chicago rap artists using terms like “Chiraq” and “bang bang”. I mean, lets be honest, trends come and go but when someone kills your sister, your brother, your cousin, your uncle or your dad… all that tough guy talk is out the door and you’re shedding tears and wishing the violence would stop. And wildly our music, which is written from mainly a dark place, seems to inspire people in a positive manner. I really find it strange and incredible at the same time.

Bix X and the Caucasians are known for their strong stage performances. Are there any future shows coming up you’ll be partaking in?

Roy: Always – check us out at Subterranean in Chicago at least once a month.

Phal: We play bars and clubs all over Chicago land and are looking to hit some festivals this summer.

X: June 9th we are opening up for Brooklyn, New York band Shinobi Ninja at Grand Bar in Chicago. I’m attempting to get us out of the Chicago circuit and on to better things soon.

For fans and readers alike, where can we find the band at online?

Lastly, would Big X and the Caucasians like to give thanks or shout outs?

Roy: Boltron – thanks for pushing me to meet these guys!

Phal: I would like to thank all my friends and family in the whole Chicago scene for their support and showing us so much love.

X: I wanna say thank your to Phal, my drummers, Roy and all the fans that keep supporting us. I love you guys!

To sum it up in one word, “Priceless” would define the energy and tracks brought to life by Big X and the Caucasians. Make sure to grab a copy of “Priceless” from the bands Bandcamp page and if you’re ever out in the Chicagoland area, make sure to catch the fellas at a live performance if possible. GYBU would like to thank everyone for participating in the interview and on that note, we’re ghost.