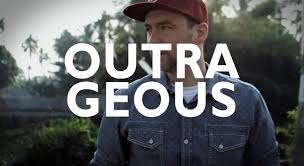 Baltimore-bred, Los Angeles-based emcee E Major presents the self-directed music video to “Outrageous”, the Rexamillion-produced leak from his upcoming album “Baltimore Bruin”. Coming on the heels of his video for “Feature Presentation” and “Zodiac Freestyle”, “Outrageous” utilizes “Movie Finale”, a beat by California producer Madlib which appeared on his “Beat Konducta In India” project and was also used by Mos Def for his song “Auditorium”. Es album Better Than Yours had already made Baltimore City Paper’s top ten albums of 2011 – two years after dubbing his Majority Rules album “a classic” – by the time his hit “Paper Runnin’” started doing the rounds on 92Q, later remixed by local legend DJ Booman.

Wielding common-sense lyricism and a relaxed, persistent flow which presides on equal footing over boom-bap and trap alike, E’s shared stages with Lupe Fiasco, Wale, and Little Brother and has gotten the nod from Okayplayer, MTV, VH1 and DJ Booth. “My wife’s family is from India and I’ve been there three times,” says E of the video. “It was just the perfect thing to shoot while on one of my trips there. I was able to rope a bunch of family members into helping me out and we hired the auto rickshaw driver and we went guerrilla style around the city of Cochin. The video is more about the feeling of the track than any of the content. I was trying to capture what it’s like to be in a totally different world like India.” “Baltimore Bruin” drops September 2.