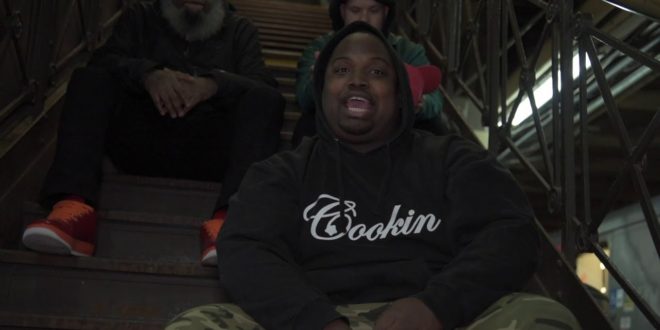 Sometimes the finest of art can be designed and presented in the most abstract of ways, similar to how a Jean-Michel Basquiat painting perfectly positions complex images, color schemes and carefully chosen words to tell a deeper profound story. In the world of Hip Hop, abstract artists like Kool Keith (Ultramagnetic Mc’s), MF Doom and Young Zee (Outsidaz) paved the way for a-alike “out of the box” writers to create with no boundaries. Rahway New Jersey’s Fatboi Sharif is cut from similar cloth of Hip Hop’s eccentric greats and has created a cult following with his debut solo album “Ape Twin”.

Continuing his “Ape Twin” campaign, Fatboi Sharif delivers the album’s second official video, “Cloud Atlas”, a song that is a reminder that above all the troubles of the world, life is great, which is repeated in every chorus as a memo and mantra to live by. The John L directed visuals showcases Fatboi Sharif cutting loose with his crew in their prided homeland of “New Jerusalem” while the Raiden produced soundscape serves as a magic carpet that Fatboi masterfully rides and navigates through several chambers and galaxies.

When speaking about “Cloud Atlas”, Fatboi Sharif stated, “This is my ode to Smoothe Da Hustler and Trigger The Gambler’s Broken Language. Its as if I am shooting a box full of jig-saw puzzle pieces at you, fully automatic, and each piece is essential to the overall slaughter. Every bar is another stroke of my paintbrush, each equally important to the finished canvas. This is my version of Broken Language.”

Fatboi Sharif’s “Ape Twin” is out now on CD and all major digital streaming services.

President, E.I.C. & Content Manager for Get Your Buzz Up - Digital Media Specialist For Independent Artists
@blitzb_60505
Previous Young Buck continues pushing compilation series with “Next Up Vol. 4” – @YoungBuck
Next After a string of solid singles, Boston producer B Leafs delivers his full length album, “The Horizon” – @BLeafsMusic