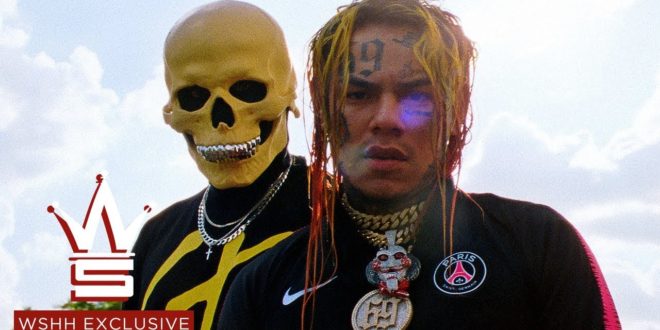 Ed Banger-affiliated, French house Producer Vladimir Cauchemar invites one of the hottest rappers in the game, Tekashi 6ix9ine, to join on his viral cult hit, “Aulos”.

One of the most remarkable and unorthodox acts to come through this year, Vlad broke through in 2017 with his track “Aulos” (2M streams/ 4.7M views and counting) – defining himself as the creator of an off-kilter “medieval techno” sound, balancing serious bassline chops but steered by wind instruments – namely the flute and the aulos. Following his remix of David Guetta and Sia’s hit “Flames”, the French producer now partners with one of the most talked about American hip hop artists of the year.

Together they drop a new version of the original cult smash with a new official video; coming through with a Roman Gavrais-influenced narrative shot in the streets of Paris, the video takes us on an electrifying outing where 6ix9ine’s angry flow and Vladimir’s haunted beats flirt with gangs in power cruisers.

President, E.I.C. & Content Manager for Get Your Buzz Up - Digital Media Specialist For Independent Artists
@blitzb_60505
Previous Manny Rite is enjoying life with a gigantic joint and lovely ladies in his video for “Games” – @mannyrite
Next Grand Opus lands a lethal amount of Hip Hop to the bloodstream with the Buckshot assisted single, “The Drug” – @grandopusca @buckshot