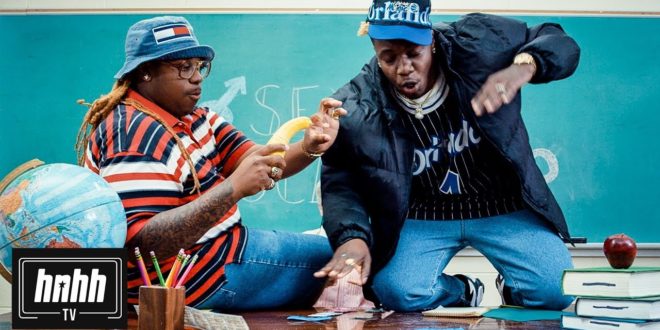 300lbs of Guwop is fresh off the release of their debut album Sexual Education, but in the video for “Pussy Class”, they’re skipping ahead in school to do their own research. We find the comedic Daytona, Florida duo, made up of 300 Rez and DK Guwop, sleeping through their 2002 sex ed course to “TRL and Chill?” texts on their Nokia phones. At that point, they feel experienced enough to take over the class from their grey-haired teacher, wielding cucumbers like a regular Sue Johanson, and apply their education to real-life experiences with their classmates.

It’s one of many catchy, hilarious tracks from “Sexual Education”, which also features the recent single “I <3 FL”, and “Teefus,” a song used by Lil Wayne on his Dedication 6 mixtape which later became the song’s official remix. Watch the video for “Pussy Class” below and listen to Sexual Education across all major streaming services.

President, E.I.C. & Content Manager for Get Your Buzz Up - Digital Media Specialist For Independent Artists
@blitzb_60505
Previous Canada’s Muhleak offers up a new sound on his mixtape effort, “The M Tape” – @Muhleak​
Next Big Dawg drops the trap heavy anthem, “Popping Out The Pan” – @wamgangbigdawg