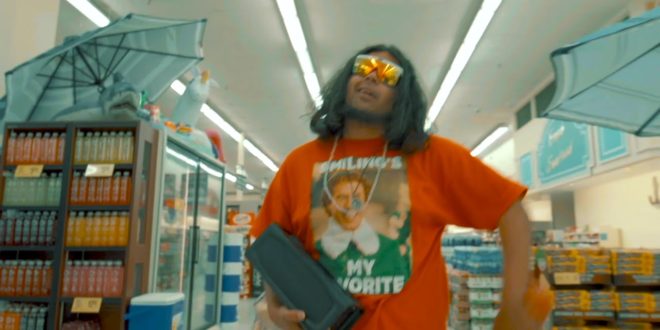 Colorado rapper Reve Kalell is heavily promoting his forthcoming, 12 track album, “Genesis”. He’s been performing in locations such as Atlanta, Detroit and his hometown of Denver. The album is riddled with politically fueled content and blistering production as found on his latest video for “Expect Us”. Sure to spark up some deep conversations and rock the system upon it’s release, the artist / human rights activist now chooses to release a loose single / video that isn’t as conscience as “Genesis”.

Cleverly titled “This Isn’t Even On The Album”, we find Reve in a bright orange “Elf” t-shirt roaming thru a local supermarket’s aisles blaring a boombox and manhandling a loaf of bread. He still keeps his word content sharp over the haunting production but is able to perform the piece in o comical sense. The video was shot by Leland Schmidt and is available to view on YouTube. Check that out then peep the “Expect Us” video afterwards to get a clear definition behind what to expect from “Genesis”.