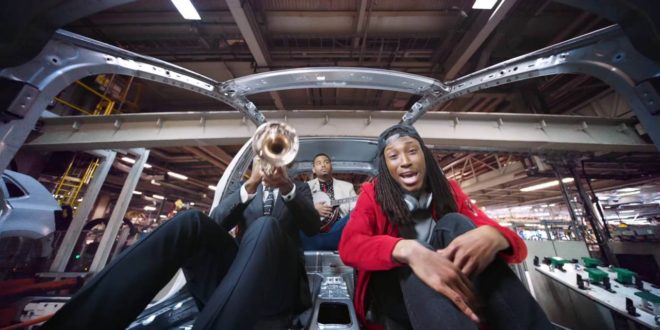 Volkswagen has teamed up with Beats by Dre to enhance their new Polo car with a sound system ready to deliver. The new ad which debuted last week featured an appearance by New Orleans artist Alfred Banks. Who is Alfred Banks you say? Well, he might just be the true Underdog of hip-hop. Alfred came onto the scene in 2009 and ever since that first show, Alfred’s tunnel vision and drive has kept him on stage doing what he does best, entertaining his fans with a fresh pair of kicks on and a scarf tied around his mic.

His persistence and love for music as well as an education from Loyola University’s Music Industry Program gave him all the right tools to lead him on a path to success. While at Loyola Alfred even collaborated with superstar and Loyola Alum, G-Eazy. Unfortunately, there’s always the bad that quickly follows the good. Alfred had to drop out of Loyola to afford to pay his bills, but quickly found himself homeless and lost within the streets of New Orleans. To make matters even worse Alfred’s older brother Orlandas Banks, who suffered from Schizophrenia and took his own life on March 20th, 2014.

Alfred had two choices, either let all of these hardships destroy not only himself, but his dreams or continue to push on and leave a legacy that his older brother always foreshadowed. Alfred chose the latter and became more determined than ever. He pulled together some resources from close friends, started to build a team, and before he knew it he was back on his feet.

Check out the highly innovative video where Alfred and crew take car building and music to a whole other level.