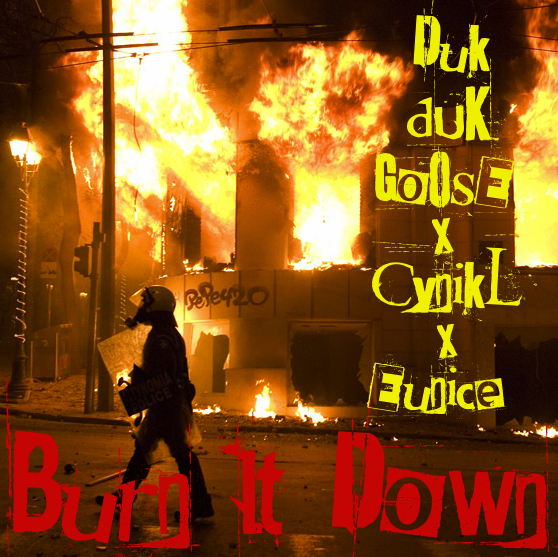 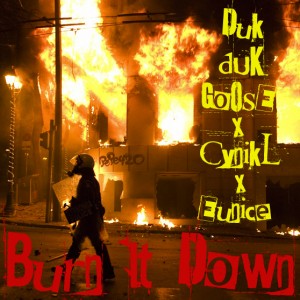 Duk Duk Goose and CynikL release the video to their single “Burn it Down” today, directed by Lenny Toussaint. The song has quickly become a fan favorite, capturing the raw emotion of tearing apart obstacles in order to rebuild and grow. Featuring intense, dynamic production by Tony Bella and a serene refrain by Eunice Wobble Wong, “Burn it Down” is an anthem for anyone who fights back against the forces that chain them in place.

The video was shot in an abandoned farm colony, which has become a popular canvas for local graffiti artists, urban explorers, and thrill-seekers looking for a place to drink around bonfires. The visuals capture the energy of that place to tell the story of rebirth amidst decay.

Duk Duk Goose is an up and coming rap duo based in Brooklyn, NY. They are known especially for their lyrical flows and energetic live shows at parties ranging from small underground loft spaces to large-scale venues like Public Assembly, Irving Plaza, and Gramercy Theater. Their music has been praised for bridging the gap between hip hop purists and Top 40 radio listeners, leading to comparisons with groups such as Outkast.

CynikL is a New York-based Hip Hop artist who aims to use his music to tell stories that anyone can relate to. His style has been described as “Old School meets the Future” for the way he takes traditional hip hop lyricism and purpose, and puts that artistry into records that do the unexpected.